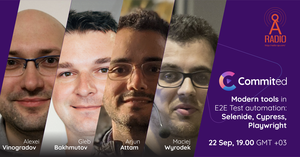 We are going to talk about Selenide, Cypress, Playwright and other popular tools.

Alexei Vinogradov
Alexei Vinogradov — Senior Developer of Selenide. Alexey has been working in various IT projects in Germany for more than 15 years. He consults about testing and test automation. The founder and moderator of Radio QA podcast.

Gleb Bahmutov
Gleb Bahmutov — VP of Engineering, Cypress.io. Gleb is a software engineer interested in front and back end development, especially in using JavaScript (and its flavors) across the entire stack. He works at Cypress, making the world a better place. He is try to blog on topics related to software craft (more than 300 blog posts!). I have circled the globe sharing my experience with other developers, see slides from the past presentations.

Maciej Wyrodek
Maciej Wyrodek — independent expert in Test Automation. Maceij is a Tester constantly driven by curiosity and hunger for destruction.
Maciej is a part of IT since 2011. His constant curiosity gave him the opportunity to work, among others, on projects for Objectivity, Dell, Volvo, Creditsafe, Jetshop, Kobo, Contium.

Arjun Attam
Arjun Attam — Program Manager at Microsoft, where he works on developer tools and services. With every company becoming a software company, he believes making developers productive creates a lot of value, and he enjoys working with them. Before joining Microsoft, he built Rubberduck and Team Chat to explore how developers collaborate, and he is now applying these learnings at scale.