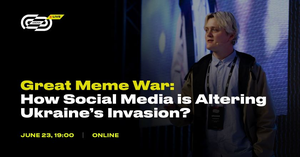 It will be moderated by Chris Stokel-Walker, a freelance journalist and regular WIRED contributor, best known for his book ‘TikTok Boom: China’s Dynamite App and the Superpower Race for Social Media’.

Some of the questions we’ll be debating in the talk will be:
What is the meme war?
How is social media reshaping Ukraine’s invasion?
It seems like Russia is extensively engaging in disinformation. On social media at least, there have been thousands of stories and war memes where Russia has clearly been lying and it was propaganda.
What impact do Russia’s disinformation campaigns have on Ukraine’s war? Is social media a new type of weapon?
And, in all of this rapid change, what is the next evolution of social media?

There’re some fantastic speakers lined up for the event including:
💥 Oobah Butler, a filmmaker and journalist who carved a niche in demonstrating the power of fake news in today’s social media climate.
💥 Marta Vasyuta, a 20-year-old Ukrainian TikToker who became an influencer almost overnight.
💥 Dima Maleev who has one of the most popular podcasts in Ukraine and a new YouTube series on war memes.

The live-stream talks are free of charge and require no prior registration.
Join the first talk on Facebook, LinkedIn or YouTube.